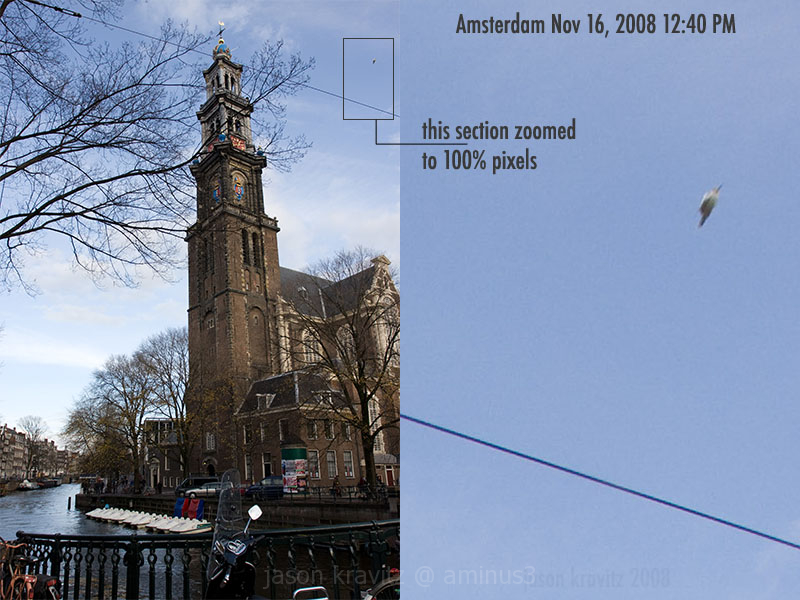 Posted by Jason Kravitz (Brussels, Belgium) on 28 March 2009 in Miscellaneous.

meant to post this one sooner but never got around to it...

This is not the first time I've captured something strange with my camera. Other oddities include weird green lights and a man made of fire.

As is often the case with these types of photos... I didn't notice anything while shooting but when looking back over my images, this shot of a church in Amsterdam contained something which looks to me like a stereotypical silver craft type of UFO.

My skeptical friends say it's a bird, others think it to be the real deal. It is most definitely not faked (this is the original shot on left and cropped at 100% pixels on right). What do you think?

I'm not sure what to make of it. However, I feel very confident in saying it will definately generate some converstion.

Looks very much like a bird to me in mid flight with the wings pulled against its body. IMHO.

I agree with Lee.....makes for interesting conversation over a couple of beers... ;-)

Hi Jason! You know how to get my attention, as well as the attention of all the resident 'skeptics'. I for one will say this is a classic hat-shaped UFO, of which there are many sightings and photos. Clearly the pilot knew whose pic to fly into to maximize publicity. Either that or he was desperately trying to accelerate out of the frame in time? No chance of that with 'Quick Draw Kravitz' behind the lens. At any rate, thanks for sharing courageously.

Does your April 4 Photowalk include intl airfare for your close friends?? :) I promise to update my blog!

I believe the object is too far to say. Although it doesn't seem a bird, it's not clear what its form is. Anyway nice shot

Stunning ... are you sure you didn't smoke some strange stuff while you we're over in Amsterdam :-)

All I can say is that is very strange.

I want to say it is a classic silver hat-shaped UFO (or an U-Submerged-O) so bad! But I think it is a bird going skyward :( Stupid bird. Great shot though, keep us posted on weird objects in the sky Jason.

Beautiful shot anyway (even though it's obviously a bird)!

Funny to hear all the sure denials. People do not see what they fear to believe. What is clear is that it looks like it is a classic UFO, and yes the hundreds of sightings like it are all over the world. Not birds those.